Chariot racing also known as "Harness Racing" was one of the most popular ancient Greek and Roman sports. 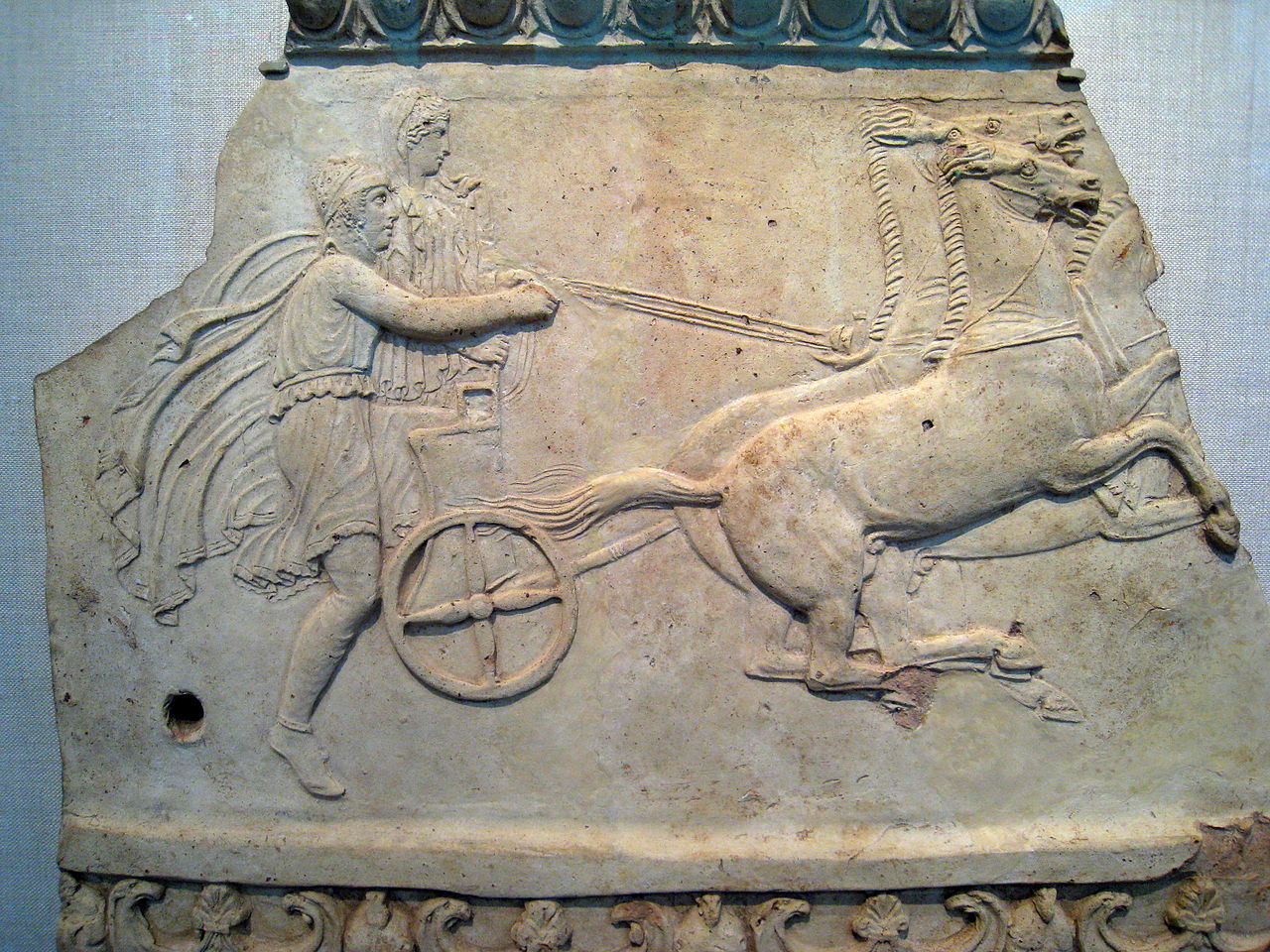 Often dangerous to both drivers and horses, who frequently suffered serious injury and even death, the sport generated strong spectator enthusiasm comparable to modern-day interest in motor sports. Some of the organizational aspects of chariot racing also paralleled current practices in professional sports.

It is unknown exactly where chariot racing began, but it may have been as old as chariots themselves. It is known from artistic evidence on pottery that the sport existed in the Mycenaean world, but the first literary reference to a chariot race is the one described by Homer in Book 23 of the Iliad, at the funeral games of Patroclus.

The participants in this race were Diomedes, Eumelus, Antilochus, Menelaus, and Meriones. The race, which was one lap around the stump of a tree, was won by Diomedes, who received a slave woman and a cauldron as his prize. A chariot race was also said to be the event that founded the Olympic Games; according to one legend, King Oenomaus challenged his daughter Hippodamia's suitors to a race, but was defeated by Pelops, who founded the Games in honour of his victory. 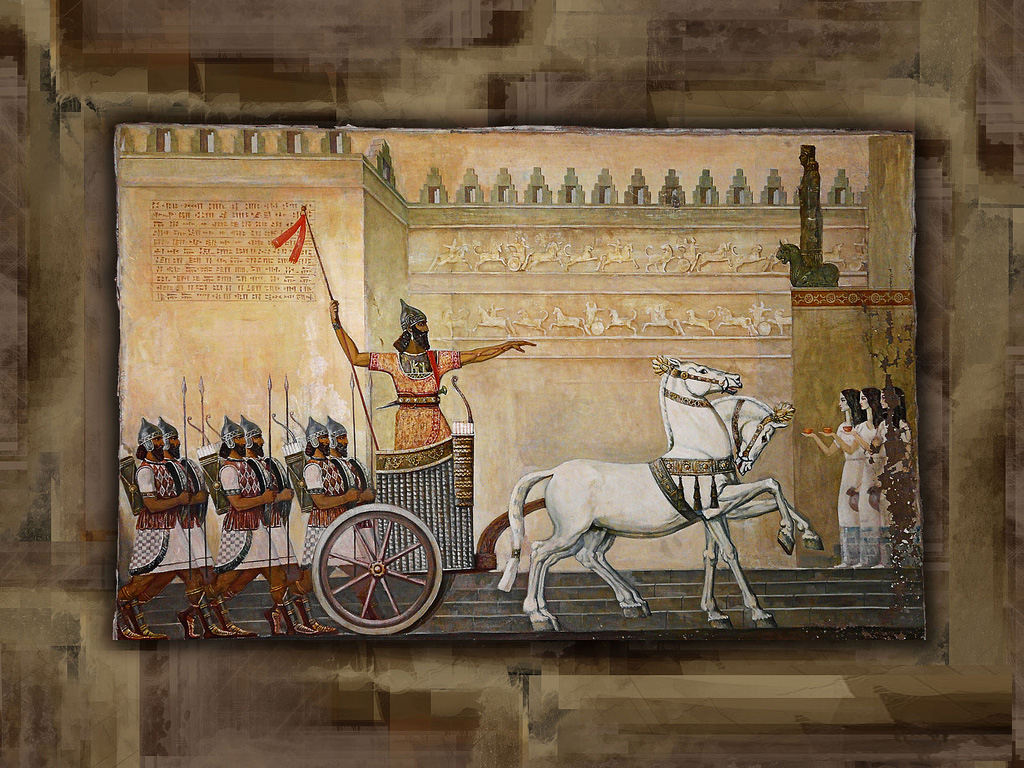 Racers wore a garment called a xystis. It fell to the ankles and was fastened high at the waist with a plain belt. Two straps that crossed high at the upper back, prevented the xystis from "ballooning" during the race. Like modern jockeys, chariot racers were chosen for their lightness, but also needed to be tall, so they were frequently teenagers.

The chariots themselves were modified war chariots, essentially wooden carts with two wheels and an open back, although chariots were by this time no longer used in battle. The charioteer's feet were held in place, but the cart rested on the axle, so the ride was bumpy. The most exciting part of the chariot race, at least for the spectators, was the turns at the ends of the hippodrome. These turns were very dangerous and often deadly. If a chariot had not already been knocked over by an opponent before the turn, it might be overturned or crushed (along with the horses and driver) by the other chariots as they went around the post. Deliberately running into an opponent to cause him to crash was technically illegal, but nothing could be done about it (at Patroclus' funeral games, Antilochus in fact causes Menelaus to crash in this way), and crashes were likely to happen by accident anyway. 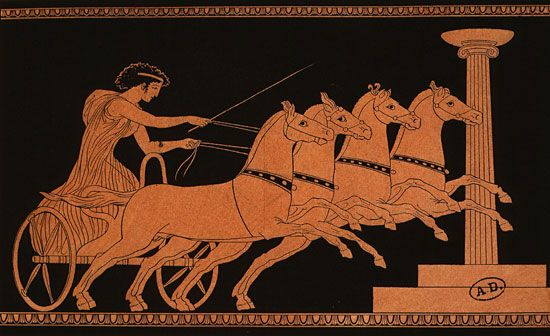 The chariot race was not as prestigious as the stadion (the foot race), but it was more important than other equestrian events such as racing on horseback, which were dropped from the Olympic Games very early on. In Mycenaean times the driver and owner would have been the same person, and therefore the winning driver received the prize. However, by the time of the Panhellenic Games, the owners usually had slaves who did the actual driving, and it was the owner who was awarded the prize. Arsecilas, the king of Cyrene, won the chariot race at the Pythian Games in 462 BC, when his slave driver was the only one to finish the race. In 416 BC the Athenian general Alcibiades had seven chariots in the race, and came in first, second and fourth; obviously he could not have been racing all seven chariots himself. Philip II of Macedon also won an Olympic chariot race in an attempt to prove he was not a barbarian, though if he had driven the chariot himself he would likely have been considered even lower than a barbarian. However, the poet Pindar did praise the courage of Herodotos for driving his own chariot. This rule also meant that women could technically win the race, despite the fact that women were not allowed to participate in or even watch the Games. This happened rarely, but a notable example is the Spartan Cynisca, daughter of Agesilaus II, who won the chariot race twice. Chariot racing was a way for Greeks to demonstrate their prosperity at the games. Lycurgus criticized chariot racing by saying that it was not as useful as building city walls or temples.

The Charioteer of Delphi, one of the most famous statues surviving from Ancient Greece. Like modern jockeys, chariot racers were chosen for their lightness, but also needed to be tall, so they were frequently teenagers.

Chariot racing was also an event at other games in the Greek world, and was the most important event at the Panathenaic Games in Athens. At these games, the winner of the four-horse chariot race was given 140 amphorae of olive oil, an extremely expensive prize, as this was more oil than an athlete would ever need in his career. Most of it was probably sold to other athletes. There was another form of chariot racing at the Panathenaic Games, known as the apobotai or the anabotai. This involved jumping out of the chariot and running alongside for some distance (the anabotai); the apobotai apparently also including jumping back into the chariot after running alongside it. In these races there was a second driver who held the reins while the first driver jumped out, but of course neither of these were considered the winner. The first chariot over the line would win, no matter if the driver was in the chariot or out. If the driver crashed, and could still walk, he would win if he crossed the finish line on foot. 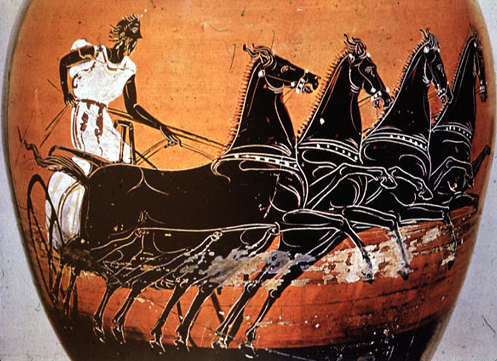 In the ancient Olympic Games, as well as the other Panhellenic Games, there were both four-horse (tethrippon) and two-horse (synoris) chariot races, which were essentially the same aside from the number of horses. The chariot racing event was first added to the Olympics in 680 BC (but was not, in reality, the founding event). The race was begun by a procession into the hippodrome, while a herald announced the names of the drivers and owners. The hippodrome at Olympia was about 600 yards long and 300 yards wide, and up to 60 chariots could race at one time (though in practice the number was probably much lower). It was located beneath a hill, and underneath a vast river, which provided standing room for possibly as many as 10,000 spectators. The tethrippon consisted of twelve laps around the hippodrome, with sharp turns around the posts at either end.

Various mechanical devices were used, including the starting gates (hyspleges, sing. hysplex) which were lowered to start the race. According to Pausanias these were invented by the architect Kleoitas, and staggered so that the chariots on the outside began the race earlier than those on the inside. The race did not actually begin properly until the final gate was opened, at which point each chariot would be more-or-less lined up alongside each other, although the ones that had started on the outside would have been travelling faster than the ones in the middle. Other mechanical devices known as the "eagle" and the "dolphin" were raised to signify that the race had begun, and were lowered as the race went on to signify the number of laps remaining. These were probably bronze carvings of those animals, set up on posts at starting line.